AgencyLogic PowerSites include detailed statistics to answer, among other questions, how many people visit your single property Websites.

Please follow these steps to pick a design – if you have additional questions give us a call on: 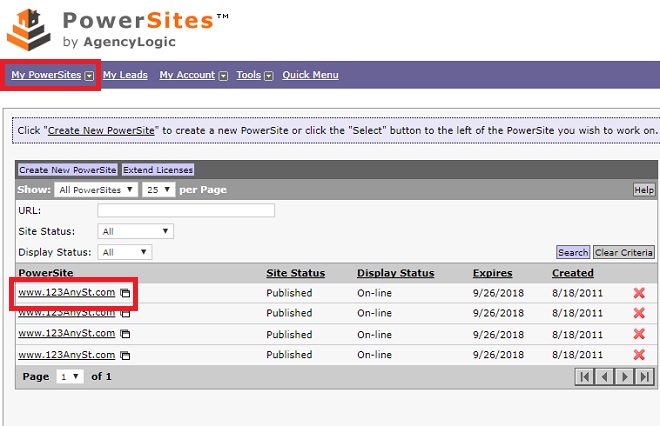 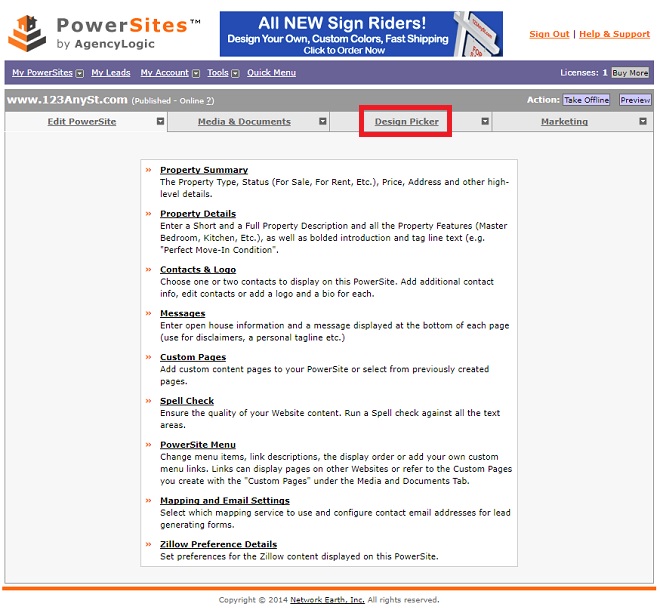 You can choose from the following Design Categories:

Within each category there are multiple designs and sub-designs. For example, if you choose the “Classic” category you will see that the first design listed has twenty sub designs:

As a result you have hundreds of designs to choose from. Once you select a design you can preview what it looks like. Click on the “Save & Preview” button in the top right corner:

You will then see your single property Website with the selected design. You can either choose that design or change it by clicking on either the “Choose Theme” or “Change Design” button in the top right corner:

You can change the design as many times as you want both before and after you single property Website has been published.

Pending home sales fell 2.5% in July, with each of the four major regions of the country seeing a decline in contract activity.

More details are in the following video, from the National Association of REALTORS YouTube channel.

Are you a generalist or a specialist? You know that an agent who focuses on everything doesn’t really attract the same commission as a specialized agent that focuses on working with their niche.

Rockstar agents like Trey Willard, Wendy Walker, Nazar Kalayji, and Gia Silva all talk about their effective strategies, winning scripts, and effective lead generation sources. They also lay some knowledge on working in the high-end real estate market, finding ways to collaborate with brands, and how to stay top of mind. Start R&D’ing all the conversion hacks and secrets that these superstar agents are sharing so you can start gaining the listings you deserve!

Many homebuyers, priced out of walkable neighborhoods, are chasing affordability to car-dependent areas

Seattle, WA – Aug. 29, 2019 (PRNewswire) (NASDAQ: RDFN) — Home-sale prices in walkable neighborhoods across the country increased 2.3 percent year over year to a median $343,900 in July, according to a new report from Redfin (www.redfin.com), the technology-powered real estate brokerage. Home prices in car-dependent areas rose 4.3 percent annually to a median of $312,100.

The report used data from Walk Score®, a Redfin company that rates the walkability of neighborhoods, cities and addresses. A place is deemed “walkable” if some or most errands can be accomplished on foot, while “car dependent” means most errands require a car.

“In the second half of 2018, homes in the hottest coastal markets became so expensive that most homebuyers became priced out of walkable neighborhoods, where homes tend to sell at a premium,” said Redfin chief economist Daryl Fairweather. “It’s not that people value walkability any less than they used to. Many homebuyers are simply relegated by their budgets to live in car-dependent areas, which have since seen demand and home prices grow at a faster rate. The trend also has implications for society, with families becoming further segregated by class and race, as well as for the environment, as more demand in car-dependent areas means more carbon emissions. Growing cities can combat these issues by adopting policies that encourage building more dense, affordable housing in walkable areas.”

San Jose (-7.2%) and Seattle (-6.5%) led the way for price drops in walkable areas in July. Though that mirrors the continued softening trends in the San Jose housing market, prices for homes in car-dependent neighborhoods rose 1.9 percent. In Seattle, homes in car-dependent areas posted a 1.5 percent year-over-year price increase.

In all but four metros in the U.S., home prices in car-dependent neighborhoods increased year over year in July. Philadelphia, with a 17.9 percent annual increase, led the pack, followed by Cleveland (10.6%), Fort Lauderdale (9.1%), Pittsburgh (8.5%) and Miami (8%). In all those places except Pittsburgh, home prices also rose in walkable neighborhoods.

Walkable parts of Columbus, Kansas City and Detroit had the biggest price increases in walkable neighborhoods

Twenty metros buck the national trend, with median home-sale prices increasing more for homes in walkable areas than car-dependent areas. That’s particularly true in the Midwest, where homes tend to be less expensive than they are on the coasts and buyers may be able to afford homes in more central areas.

To read the full report, including graphs and methodology, please visit: https://www.redfin.com/blog/walkable-neighborhoods-home-prices-rising-slower.

About Redfin
Redfin (www.redfin.com) is a technology-powered real estate brokerage, combining its own full-service agents with modern technology to redefine real estate in the consumer’s favor. Founded by software engineers, Redfin has the country’s #1 brokerage website and offers a host of online tools to consumers, including theRedfin Estimate, the automated home-value estimate with the industry’s lowest published error rate for listed homes. Homebuyers and sellers enjoy a full-service, technology-powered experience from Redfin real estate agents, while saving thousands in commissions. Redfin serves more than 90 major metro areas across the U.S. and Canada. The company has helped customers buy or sell homes worth more than $85 billion.

New tax breaks are aimed at spurring improvement in low-income Opportunity Zone areas of the United States; almost half have median home prices below $150,000

Irvine, CA – Aug. 29, 2019 (PRNewswire) ATTOM Data Solutions, curator of the nation’s premier property database and first property data provider of Data-as-a-Service (DaaS), today released a special report analyzing qualified Opportunity Zones established by Congress in the Tax Cuts and Jobs act of 2017 (see full methodology below). In this report, ATTOM looked at nearly 3,100 zones with sufficient sales data to analyze, which included areas with at least five home sales in the second quarter of 2019 as well as an average of at least five sales per quarter since Q3 2018.

The analysis found that roughly 80 percent of those zones had median home prices in the second quarter of 2019 that were below the national figure of $266,000 and that half had median prices of less than $150,000.

The report further compared Opportunity Zones to surrounding regions and found that median Q2 2019 prices in about one in four zones were less than 50 percent of the typical value in the Metropolitan Statistical Areas where they exist.

“Opportunity Zones are among the poorest areas of the country, with some of the lowest home prices. This should come as no surprise because the zones are designed to be in or alongside economically distressed neighborhoods,” said Todd Teta, chief product officer with ATTOM Data Solutions. “But the differences between these and other areas in most parts of the nation are stark. The numbers provide key benchmarks for how much room there is for these areas to grow and how much new investment they need.”

High-level findings from the report include:

In addition, the report found that among Opportunity Zones with at least 10 sales in each of the five latest quarters, 41 had Q2 2019 medians of $400,000 or more. They included areas of King County, WA; Denver County, CO; Coconino County, AZ; Deschutes County, OR and Alameda and Contra Costa counties in California.

At the opposite end, 50 zones had Q2 2019 medians of less than $50,000. They included areas of Philadelphia, PA; Baltimore, MD; Montgomery, AL; Duval County, FL and Jefferson County, AL.

Report methodology
The ATTOM Data Solutions Opportunity Zones analysis is based on home sales price data derived from recorded sales deeds. Statistics for previous quarters are revised when each new report is issued as more deed data becomes available. ATTOM Data Solutions compared median home prices in tracts designated as Opportunity Zones by the Internal Revenue Service. Except where noted, tracts were used for the analysis if they had at least five sales in Q2 2019, plus an average of five sales per quarter for the latest four quarters. Median household income data for tracts and counties comes from surveys taken the U.S. Census Bureau (www.census.gov) from 2013 through 2017. The list of designated Qualified Opportunity Zones is located at U.S. Department of the Treasury. Regions are based on designations by the Census Bureau. Hawaii and Alaska, which the bureau designates as part of the Pacific region, were included the West region for this report.

Fannie Mae helps make the 30-year fixed-rate mortgage and affordable rental housing possible for millions of Americans. We partner with lenders to create housing opportunities for families across the country. We are driving positive changes in housing finance to make the home buying process easier, while reducing costs and risk. To learn more, visit fanniemae.com and follow us on twitter.com/fanniemae.